Calvary Chapel Encinitas is a venture in faith...

ABOUT US
Calvary Chapel Encinitas is one of a worldwide network of over 1,600 Calvary Chapel churches (Calvary Chapel Association), and has been formed as a fellowship of believers in the Lordship of Jesus Christ. Our supreme desire is to know Christ and be conformed into His image by the power of the Holy Spirit.

We are not a denominational church, nor are we opposed to denominations as such, only to their over-emphasis of the doctrinal difference that have led to the division of the Body of Christ. We believe that the only true basis of Christian fellowship is His (agape) love, which is greater than any differences we possess, and without which we have no right to claim ourselves Christians.

Calvary Chapel Encinitas began in 2009 under the call and direction of the Holy Spirit. We are committed to simply teaching the Bible simply, going verse by verse through the whole Bible from Genesis to Revelation (Acts 20:27), and uphold the principle that Jesus will build His Church (Matt 16:18). Through loving Christian fellowship, we seek to stimulate one another towards righteousness, acknowledging that our highest goal is the glory of God. We are so blessed to be on mission with Him making disciples, relying on Him to build His church here in the Coastlands and throughout the world (Matt 28:18-20; Acts 1:8).

OUR HISTORY
Founded in 2009, Calvary Chapel Encinitas (originally “Moriah Chapel”) was birthed out of prayer meetings. Pastor Rick Greene gathered believers together for prayer meetings where we would walk the streets of Cardiff by the Sea and seek the Lord for the community and for His direction in a church plant. Our first prayer meeting was on April 18, 2009, and we had multiple prayer meetings for the next 4 months.

On August 16, 2009, we had our first Sunday night Bible study in Encinitas at the Clubhouse of the condo complex where Rick and his family lived. About 6 months later, on February 7, 2010, we began Sunday morning services at the Holiday Inn Express in Cardiff by the Sea. Then the Lord opened the door for us to meet at the Cardiff by the Sea Library right in the heart of the city, and we had our first service on Septemper 11, 2011.

On May 4, 2014, we moved to Oak Crest Middle School so that we would have more room for our Children’s Ministry. On July 5, 2015, we moved back to Cardiff to meet at Cardiff Elementary School, and it was at that time we changed the name to Calvary Chapel Encinitas. As of January 7, 2018, we moved back to the Cardiff by the Sea Library, where we currently meet. We believe that it is “not by might, nor by power, but by My Spirit, saith the Lord of Hosts” (Zech 4:6), and that Jesus will fulfill His promise of building His church (Matt 16:18). We look forward to all the Lord will do in this community and the Coastlands of San Diego for His glory. 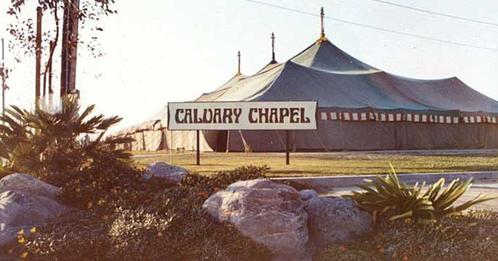 The History of Calvary Chapel

In 1965, Pastor Chuck Smith began his ministry at Calvary Chapel Costa Mesa with just twenty-five people. From the beginning, Pastor Chuck welcomed all, young and old, without judgment, placing his emphasis on the teaching of the Word of God. His simple, yet sound, expositional biblical approach has helped millions better understand God’s Word.
With a sincere concern for the lost, Pastor Chuck and Kay Smith made room in the church and their home for a generation of hippies and surfers; generating a movement of the Holy Spirit that spread from the West Coast to the East Coast, and now, throughout the world. What began as a small local church has now grown into an international ministry of over 1,600 fellowships throughout the world, all in the last 40 years. For more info, visit pastorchuck.org and calvarycca.org.

Come worship with us...

Join us every Sunday as we gather to worship together and learn God's Word at 10:00 am.